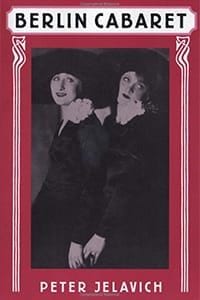 Fads and fashions, sexual mores and political ideologies—all were subject to satire and parody on the cabaret stage. This book follows the changing treatment of these themes, and the fate of cabaret itself, through the most turbulent decades of modern German history: the prosperous and optimistic Imperial age, the unstable yet culturally inventive Weimar era, and the repressive years of National Socialism. By situating cabaret within Berlin’s rich landscape of popular culture and distinguishing it from vaudeville and variety theaters, spectacular revues, prurient “nude dancing,” and Communist agitprop, Jelavich revises the prevailing image of this form of entertainment.

Neither highly politicized, like postwar German Kabarett, nor sleazy in the way that some American and European films suggest, Berlin cabaret occupied a middle ground that let it cast an ironic eye on the goings-on of Berliners and other Germans. However, it was just this satirical attitude toward serious themes, such as politics and racism, that blinded cabaret to the strength of the radical right-wing forces that ultimately destroyed it. Jelavich concludes with the Berlin cabaret artists’ final performances—as prisoners in the concentration camps at Westerbork and Theresienstadt.

This book gives us a sense of what the world looked like within the cabarets of Berlin and at the same time lets us see, from a historical distance, these lost performers enacting the political, sexual, and artistic issues that made their city one of the most dynamic in Europe.