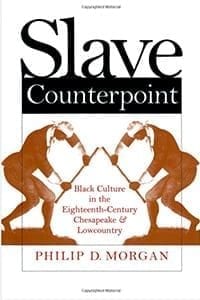 On the eve of the American Revolution, nearly three-quarters of all African Americans in mainland British America lived in two regions: the Chesapeake, centered in Virginia, and the Lowcountry, with its hub in South Carolina. Here, Philip Morgan compares and contrasts African American life in these two regional black cultures, exploring the differences as well as the similarities. The result is a detailed and comprehensive view of slave life in the colonial American South.

Morgan explores the role of land and labor in shaping culture, the everyday contacts of masters and slaves that defined the possibilities and limitations of cultural exchange, and finally the interior lives of blacks—their social relations, their family and kin ties, and the major symbolic dimensions of life: language, play, and religion. He provides a balanced appreciation for the oppressiveness of bondage and for the ability of slaves to shape their lives, showing that, whatever the constraints, slaves contributed to the making of their history. Victims of a brutal, dehumanizing system, slaves nevertheless strove to create order in their lives, to preserve their humanity, to achieve dignity, and to sustain dreams of a better future.