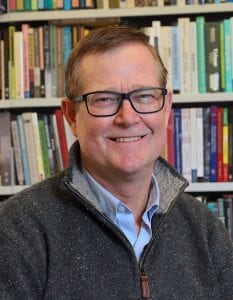 The papers of renowned African scholar Pier Larson, who died in 2020 as professor in the Department of History, have been gifted to the Melville J. Herskovits Library of African Studies at Northwestern University. The library is one of the most comprehensive collections of African material worldwide, and was a frequent site for Larson’s research over the course of his extensive career. Read more about the gift.

Larson, who arrived at Hopkins in 1998, specialized in the history of Madagascar and the Indian Ocean islands, focusing on the 17th, 18th, and 19th centuries. His teaching and research centered on the history of East and southern Africa, Madagascar, and the Francophone islands of the Western Indian Ocean, slavery, literacy, religion, and the history of the French empire. His work illuminated historical connections between Madagascar, the eastern coast of Africa, South Asia, and the islands of Mauritius and Reunion, helping to make Indian Ocean communities a more integral part of the broader study of Africa.

“Dr. Larson was consummately cosmopolitan: Equally at home in the United States, France, and Madagascar, with prodigious linguistic abilities, he bridged cultures with ease, at the same time that he understood and appreciated their differences,” said Peter Jelavich, professor and chair of the Department of History. “This truly humanistic attitude allowed him to uncover hitherto unperceived connections among peoples and cultures in the past—and it guided his life in the present.”

Esmeralda Kale, the George and Mary LeCron Foster Curator of the Herskovits Library, concurred: “Fluent in French and Malagasy, Dr. Larson crisscrossed the globe for decades, undertaking archival research in a methodical manner, inventorying the archives he was studying, and transcribing tens of thousands of documents. His inventories, photographs, and transcriptions are therefore an extremely rich resource for anyone doing research in this area.”

The voluminous archive includes The Larson Fieldwork Collection of oral interviews, video recordings of performed music and cultural gatherings, transcripts, and photographs (materials that supported his 1992 dissertation and his first book, History and Memory in the Age of Enslavement: Becoming Merina In Highland Madagascar, 1770-1822); detailed inventories of the archives where Larson worked for decades along with extensive transcriptions of archival documents; research notes; lecture notes and class syllabi;  three unpublished manuscripts he was working on at the time of his death: Island of Letters: Reading, Writing, and Arithmetic in an African Kingdom, The Corrollers: An Indian Ocean Family, and the third in a series of articles that were the beginnings of a book on the 17th century French colony of Fort Dauphin in Madagascar (one of these articles, “Play and Possession: Sex, Marriage, and Household at Fort Dauphin (Madagascar), c. 1660s,” will appear in the Journal of Southern African Studies, vol. 48, no. 5, in November 2022). Larson’s files of photographs include primary source materials (in some cases the only digital copies), art, topography, landscapes, historic structures, and people, all carefully cataloged.

“Dr. Larson was a pioneering scholar and a master archivist,” said Sara Berry, professor emeritus in the Department of History, who was instrumental in finding a home for his papers. “Having access to his enormous collection of primary sources as well as the manuscripts he was working on at the time of his death will allow scholars to carry forward the study of a region whose complex interlinkages are only beginning to be understood.”

Larson had worked extensively with the Herskovits Library, making him quite familiar with its holdings and its place in the scholarship of the field. Larson’s wife, Michelle Boardman, believed this made the Herskovits the logical home of his papers.

“The Herskovits is one of the most comprehensive collections of African material worldwide and is a place Pier knew well,” she said. “His work can now be easily found and used by the widest possible scholarly community.”