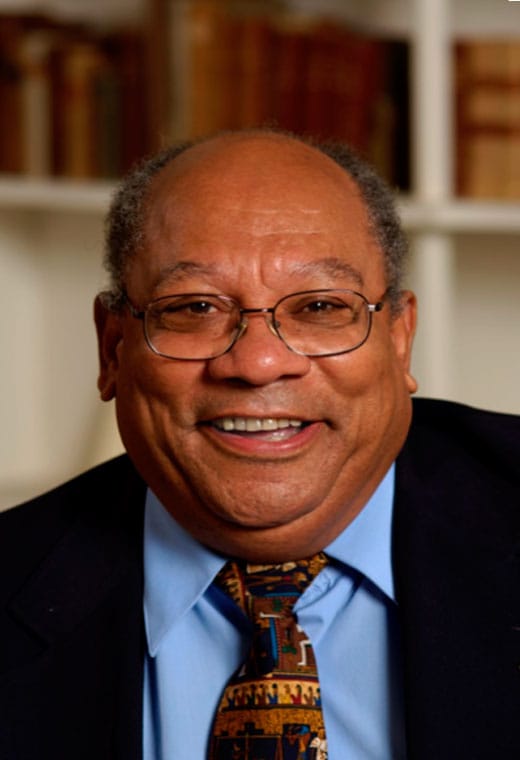 Franklin W. Knight joined the faculty of the Johns Hopkins University in Baltimore in 1973 and in 1991 was appointed the Leonard and Helen R. Stulman Professor of History.

Knight’s research interests focus on social, political, and cultural aspects of Latin America and the Caribbean, especially after the 18th century, as well as on American slave systems in their comparative dimensions.

His analyses of Latin American and Caribbean problems have been aired on National Public Radio, the Voice of America, the British Broadcasting Corporation, the McNeill/Lehrer Report, C-Span, and many local programs on commercial as well as public radio and television stations across the United States. He served as academic consultant to the television series Columbus and the Age of Discovery; The Buried Mirror; Americas; Plagued: Invisible Armies; Crucible of Empire: The War of 1898, The Crucible of the Millennium; and The Louisiana Purchase.

Professor Knight was president of The Historical Society (2004–2006), and served as president of the Latin American Studies Association between October 1998 and May 2000. He also serves on advisory committees of the National Research Council, the Handbook of Latin American Studies of the Hispanic Division of the Library of Congress and the editorial boards of several academic journals. He has lectured across the Americas as well as in Australia, Japan, and Europe. In 2001 he was elected a Corresponding Member of the Academy of Letters of Bahia, Brazil and in 2006 a Corresponding member of the Academia Dominicana de la Historia. In 2007 the University of the West Indies, Mona Jamaica awarded Professor Knight an Honorary Doctor of Letters. He was elected Corresponding Member of the Cuban Academy of History in 2012; a  Miembro de Honor by the Asociación de Historiadores de America Latina y del Caribe (ADHILAC) in 2011; and the Asociación de Historia Ecómica del Caribe (AHEC) in 2013. He also won the Gold Musgrave Medal for Literature from the Council of the Institute of Jamaica in 2013.

Knight’s major publications include: Slave Society in Cuba during the Nineteenth Century (Wisconsin, 1970); The African Dimension of Latin American Societies (Macmillan, 1974); The Caribbean: The Genesis of a Fragmented Nationalism (Oxford, 1978; 2nd Edition, revised 1990); Africa and the Caribbean: Legacies of a Link co-edited with Margaret Crahan (Johns Hopkins, 1979); The Modern Caribbean co-edited with Colin A. Palmer (Chapel Hill, 1989); Atlantic Port Cities: Economy, Culture and Society in the Atlantic World, 1650-1850 co-edited with Peggy K. Liss (Tennessee, 1991), UNESCO General History of the Caribbean, volume III: The Slave Societies of the Caribbean (London and Basingstoke: UNESCO Publishing/Macmillan Educational Publishing, 1997), and edited a new translation of Bartolomé de Las Casas, An Introduction, Much Abbreviated, of the Destruction of the Indies (Hackett, 2003) as well as with Teresita Martinez Vergne, Contemporary Caribbean Cultures and Societies in a Global Context, (Chapel Hill, 2005). He was co-translator of Sugar and Railroads, A Cuban History, 1837-1959 by Oscar Zanetti and Alejandro García (Chapel Hill, 1998). In addition, he has published more than 82 articles, chapters, and forewords, as well as more than 140 book reviews in professional journals.

Between 1974 and 1982, Knight co-edited the Johns Hopkins University Press series of studies in Atlantic History and Culture; and between 1975 and 1986 he edited the Caribbean section of the Handbook of Latin American Studies published by the Hispanic Division of the Library of Congress.