I study and teach the political and cultural history of modern Russia, the history of the Soviet-American Cold War, and the great works of Russian and Soviet culture in their contemporary context. My The Firebird and the Fox: Russian Culture under Tsars and Bolsheviks (Cambridge University Press, 2019) showcases the genius of Russian literature, art, music, and dance over a century of turmoil within the dynamic cultural ecosystem that shaped it. The Firebird and the Fox explores the shared traditions, mutual influences, and enduring themes that recur in these art forms from 1850-1950. The book uses two emblematic characters from Russian culture—the firebird, symbol of the transcendent power of art in defiance of circumstance and the efforts of censors to contain creativity; and the fox, usually female and representing wit, cleverness and the agency of artists and everyone who triumphs over adversity—to explore how Russian cultural life changed over the period. High culture drew on folk and popular genres, then in turn influences an expanding commercial culture.

My earlier Thank You, Comrade Stalin! Soviet Public Culture from Revolution to Cold War (Princeton University Press, 2000) explores public opinion and the official narrative in the Soviet press under Lenin and Stalin. In When Russia Learned to Read: Literacy and Popular Literature, 1861-1917 (Princeton University Press, 1985) I discuss how millions of formerly illiterate peasants and urban residents learned to read—why they valued literacy, how they used it, and how their entry into cultural markets changed Russian art and literature. The book won the Wayne S. Vucinich Book Prize of the American Association for the Advancement of Slavic Studies in 1986 and was reprinted with a new introduction in 2003. I also co-authored with Georgiy Chernyavskiy Lenin and the Making of the Soviet State: A Brief History with Documents (Bedford St. Martin, 2006).

I have in addition published over fifty book chapters in edited volumes and essays in leading scholarly journals such as The American Historical Review and The Slavic Review. Recent essays include "Laughing with the Count: Humor in War and Peace and Beyond," in Tolstoy and His Problems: Views from the Twenty-First Century, ed. Inessa Mezdzhibovskaya (2018); "The Gothic Tradition in Russian and Early Soviet Culture," in Russian Literature (2019); "Readers and Reading during Russia's Literacy Transition 1850-1950: How Readers Shaped a Great Literature," in The Edinburgh History of Reading, Volume 2 (2019); and "The Press and the Public Adjust to a New Normal, 1918-1935," in Reading Russia: A History of Reading in Modern Russia, in the series "Di/Segni" Università degli Studi di Milano.

My research has been supported by The Guggenheim Foundation, the Fulbright-Hays Program, The National Endowment for the Humanities, the Woodrow Wilson Center, the National Council for Soviet and East European Research, and the IREX Academy Exchange, among others.

I received the Johns Hopkins Alumni Association Excellence in Teaching Award in Arts and Sciences in 2004.

I am currently not accepting graduate students.

He is the author of When Russia Learned to Read: Literacy and Popular Literature, 1861-1917 (1985; reprinted 2003); Thank You, Comrade Stalin! Soviet Public Culture from Revolution to Cold War (2000), and Lenin and the Making of the Soviet State: A Brief History with Documents, co-authored with Georgiy Chernyavskiy (2006); The Firebird and the Fox: Russian Culture under Tsars and Bolsheviks (Dec., 2019).

Recent and forthcoming essays include: 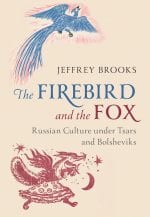 The Firebird and the Fox: Russian Culture under Tsars and Bolsheviks

Lenin and the Making of the Soviet State: A Brief History with Documents

When Russia Learned to Read: Literacy and Popular Literature, 1861-1917