Professor Martha S. Jones is the Society of Black Alumni Presidential Professor, Professor of History, and a Professor at the SNF Agora Institute at The Johns Hopkins University. She is a legal and cultural historian whose work examines how Black Americans have shaped the story of American democracy.

Her work includes four books. Vanguard: How Black Women Broke Barriers, Won the Vote, and Insisted on Equality for All (2020), was winner of the 2021 L.A. Times Book Prize for History, the finalist for the 2021 Mark Lynton History Prize, a 2021 MAAH Stone Book Award short list selection, a 2021 Cundill History Prize short list selection, and named a best book for 2020 by Ms., Time, Foreign Affairs, Black Perspectives, the Undefeated and Smithsonian. Birthright Citizens: A History of Race and Rights in Antebellum America (2018), was winner of the Organization of American Historians Liberty Legacy Award, the American Historical Association Littleton-Griswold Prize, the American Society for Legal History John Phillip Reid book award, and a Baltimore City Historical Society Scholars honor for 2020. She is also author of All Bound Up Together: The Woman Question in African American Public Culture 1830-1900 (2007) and a coeditor of Toward an Intellectual History of Black Women (University of North Carolina Press (2015), together with many articles and essays.

Professor Jones is a public historian, writing for broader audiences at the New York Times, Washington Post, the Atlantic, USA Today, Public Books, Talking Points Memo, Politico, the Chronicle of Higher Education, and Time. She is an exhibition curator for “Reframing the Color Line” and “Proclaiming Emancipation” at the William L. Clements Library, and an expert consultant for museum, film and video productions with the Smithsonian’s National Portrait Gallery, the Charles Wright Museum of African American History, PBS American Experience, the Southern Poverty Law Center, Netflix, and Arte (France.)

Professor Jones holds a Ph.D. in history from Columbia University and a J.D. from the CUNY School of Law which bestowed upon her the degree of Doctor of Laws honoris causa in 2019. Prior to her academic career, she was a public interest litigator in New York City, recognized for her work as a Charles H. Revson Fellow on the Future of the City of New York at Columbia University.

She is an immediate past co-president of the Berkshire Conference of Women Historians, and today serves on the boards and committees of the Society of American Historians, the Library of Congress, the National Women's History Museum, the US Capitol Historical Society, the Johns Hopkins University Press, the CUNY Law School Foundation, the Journal of African American History and Slavery & Abolition.

“Are There New Lives for Old Objects at the National Museum of African American History and Culture?” Muster: The Blog of the Journal of the Civil War Era. October 11, 2016.

“On The Cherokee Rose, Historical Fiction, and Silences in the Archives.” Process: The Blog of the Organization of American Historians. May 26, 2015.

“Mining Our Collective Memory: Beyond the Academic-Activist Divide in Black Studies,” Souls: A Critical Journal of Black Politics, Culture, and Society. 6, no. 3/4 (October 2004): 71-76. 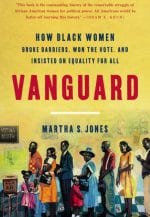 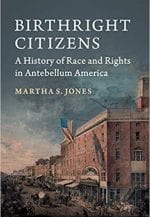 Birthright Citizens: A History of Race and Rights in Antebellum America 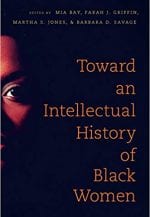 Toward an Intellectual History of Black Women 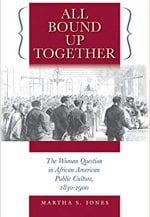 All Bound Up Together: The Woman Question in African American Public Culture, 1830-1900

“What Mark Lilla Gets Wrong About Students.” The Chronicle Review. August 2017.

“The 14th Amendment Solved One Citizenship Crisis, but it Created a New One.” Washington Post. July 2017.

“The Dreams Deferred in Baltimore’s Mortgage Crises Set the Stage for Unrest.” The Conversation. May 2015.

“Why We Still Need Black History Month, Even Though #28daysarenotenough.” CNN Living. February 2015.

“From Michael Stewart to Michael Brown: A Reflection on #FergusonOctober.” Huffington Post. November 2014.

“In 1864 Maryland, Confusion Over Emancipation Made Slaves Interpreters of Law.” Huffington Post. August 2014.

“When it Comes to Diversity, Who Counts?” Huffington Post. March 2014.

“Turning Back the Time of Racism.” Huffington Post. February 2013.