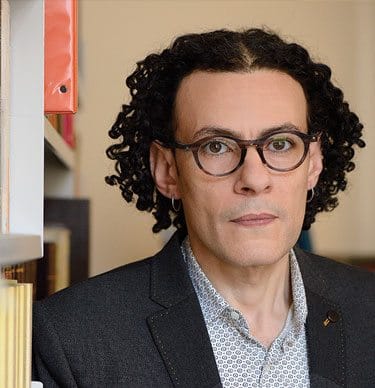 In a former life, I studied Economics in Cairo (BA, American University in Cairo) and after graduating, worked as an economist for an oil company. Then, upon reading a historical novel set in medieval Cairo, I saw the light and discovered a passion for medieval history, a conversion that led me back to graduate school to read medieval history in Cairo, then at Cambridge Univ. (MPhil., 1998), and Princeton (PhD, 2005). I then joined the Harvard Society of Fellows as a Junior Research Fellow (2003-06) and taught at NYU (2007-14), before arriving at Johns Hopkins University.

I am principally interested in the history of religious difference in the medieval Middle East—how religious identity structured people’s lived experience and religious difference, but also how their social practices challenge and complicate the picture of inter-religious relations derived from traditional prescriptive sources (theological, legal, and polemical).

My forthcoming book, Coptic Muslims: Religious Difference and Conversion in Medieval Egypt examines the late-medieval mass conversion from Coptic Christianity to Islam—most likely the moment when Egypt became a ‘majority’ Muslim region. This pivotal process occurred almost seven centuries after the Arab-Muslim conquests; it was also one of the least ‘complete’ instances of Islamization in the region: Coptic Christians today comprise roughly 12% of Egypt’s population (the single largest non-Muslim community in the Arab-Muslim world). The conversion wave involved many converts who changed their personal religious identity—but more importantly, it also had deep and long-term effects on the religious traditions of Coptic Christianity and Islam.

I am currently working on two projects. The first, tentatively titled Arabization and the Deep Grammar of Religious Transformation, is a longue-durée cultural history of Egypt’s linguistic transformation form Coptic to Arabic (ca. 10th-13th c.). What impact did linguistic conversion have on the cultural valence of Arabic—and on religious difference, in general—in medieval Egypt? In addressing this question, I traces the various registers of Arabization and the different ways Coptic Christians—clerical and lay, urban and rural—negotiated this transformation and inhabited their new linguistic milieu. The study also explores the consequences of Arabization for the Coptic religious tradition (e.g. Biblical translations and a new Christian-Arabic theology) and for changes in religious and lay authority within the Coptic community.

The second, smaller project—The Biography of a Alley in Late-Medieval Cairo: Coptic Family, Urban Property, and Legal Acculturation—is a micro-history that reconstructs a (predominantly) Coptic Christian neighborhood in 16th-century Cairo from a hitherto unknown cache of legal documents (and court records) to examine the relationship between family, property, and legal practice. Significantly, these Christian litigants conducted all their personal, familial, and communal affairs in Muslim courts (i.e. through Islamic law).

"Sufis, Copts, and the Politics of Piety: Moral Regulation in 14th-century Upper Egypt" in Adam Sabra and Richard McGregor, eds. The Development of Sufism in Mamluk Egypt ) Cairo, 2006), pp. 75-120.

I have been fortunate to develop several courses on medieval history, centered on the medieval Islamicate world and its connections to, and interactions with, other regions. My undergraduate courses include a lecture survey, The Making of the Muslim Middle East, 600- 1100 a.d. as well as thematic upper-level seminars, including Conversion and Apostasy in the Middle Ages; Children and Childhood in the Middle Ages, and Mobility and Encounter in the Medieval Indian Ocean.

My graduate courses include textual and reading skills colloquia, including (a) Everyday Life in Medieval Cairo, which introduces students to different genres of medieval Arabic documents, including paleography as well as methods of using documentary sources; and (b) The World of the Geniza, where students learn Judeo-Arabic and explore material from the Cairo Geniza, a trove of documents from Egypt’s medieval Jewish community.  I also teach topical seminars, including Family History in the Medieval Mediterranean; Medieval Violence: Martyrdom, Communal Violence, and Punishment, and ‘Ajā’ib: Marvels and Wonder in Medieval Arabic Culture.