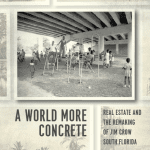 A World More Concrete: Real Estate and the Remaking of Jim Crow South Florida (University of Chicago Press), argues that, between the early 1900s and the 1960s, property ownership helped set the terms of Jim Crow segregation. It shows how a shared stake in growing South Florida’s economy allowed competing property interests from opposite sides of the color line to forge consensus about the best way to manage urban development and police the black poor. As a work of both political economy and cultural studies, A World More Concrete focuses on American political culture and the nuts and bolts of how real estate interests claimed spaces, in legal terms, for the United States while selling them, in Miami’s case, as something more-than-American for tourists and potential investors. In particular, the book explores previously unknown dynamics between property management firms, landlords, tenants, government officials, and suburban homeowners in order to show how property owners of various stripes tied meanings of blackness and whiteness to the built environment.