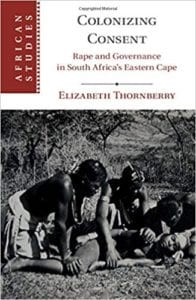 Elizabeth Thornberry uses historical evidence to shed light on South Africa’s contemporary epidemic of sexual violence. Drawing on over a thousand cases from a diverse set of courts, Thornberry reconstructs the history of rape in South Africa’s Eastern Cape, from the precolonial era to the triumph of legal and sexual segregation, and digs deep into questions of conceptions of sexual consent. Through this process, Thornberry also demonstrates the political stakes of disputes over sexual consent, and the ways in which debates over the regulation of sexuality shaped both white and black politics in this period. From customary authority to missionary Christianity and humanitarian liberalism to segregationism, political claims implied theories of sexual consent, and enabled distinctive claims to control female sexuality. The political history of rape illuminates not only South Africa’s contemporary crisis of sexual violence, but the entangled histories of law, sexuality, and politics across the globe.