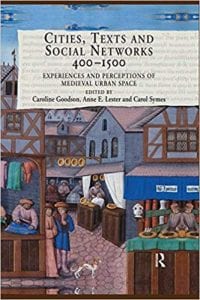 Cities, Texts and Social Networks examines the experiences of urban life from late antiquity through the close of the fifteenth century, in regions ranging from late Imperial Rome to Muslim Syria, Iraq and al-Andalus, England, the territories of medieval Francia, Flanders, the Low Countries, Italy and Germany. Together, the volume’s contributors move beyond attempts to define ‘the city’ in purely legal, economic or religious terms. Instead, they focus on modes of organisation, representation and identity formation that shaped the ways urban spaces were called into being, used and perceived. Their interdisciplinary analyses place narrative and archival sources in communication with topography, the built environment and evidence of sensory stimuli in order to capture sights, sounds, physical proximities and power structures. Paying close attention to the delineation of public and private spaces, and secular and sacred precincts, each chapter explores the workings of power and urban discourse and their effects on the making of meaning. The volume as a whole engages theoretical discussions of urban space – its production, consumption, memory and meaning – which too frequently misrepresent the evidence of the Middle Ages. It argues that the construction and use of medieval urban spaces could foster the emergence of medieval ‘public spheres’ that were fundamental components and by-products of pre-modern urban life. The resulting collection contributes to longstanding debates among historians while tackling fundamental questions regarding medieval society and the ways it is understood today. Many of these questions will resonate with scholars of postcolonial or ‘non-Western’ cultures whose sources and cities have been similarly marginalized in discussions of urban space and experience. And because these essays reflect a considerable geographical, temporal and methodological scope, they model approaches to the study of urban history that will interest a wide range of readers.