My research and teaching focuses on topics related to intellectual history, transnational history, and the history of political economy since the 1930s.

My book, The Great Persuasion: Reinventing Free Markets since the Depression, explores the transformation of market advocacy over the middle decades of the twentieth century. It received the Merle Curti Award from the Organization of American Historians and the Joseph Spengler Prize from the History of Economics Society. I am currently writing a book on the intellectual history of the internet, for which I will be on leave during the 2021–2022 academic year. Other recent writings on the political economy of technology are available in American Labyrinth: Intellectual History for Complicated Times (ed. Raymond Haberski and Andrew Hartman) and Beyond the New Deal Order (ed. Gary Gerstle, Alice O’Connor, and Nelson Lichtenstein).

Sample undergraduate and graduate syllabi are available in full via the “Teaching” tab on this site. I am especially proud of the accomplishments of my graduate and undergraduate students, who in recent years have won both the Butler Prize for the best first-year graduate paper and the Kouguell Prize for the best undergraduate thesis in the department. In 2019 I received the Krieger School of Arts and Sciences Graduate Teaching and Mentoring Award. I am also helping to lead a working group for the Center for Advanced Study in the Behavioral Sciences at Stanford that seeks to develop new cross-disciplinary teaching platforms related to moral and political economy.

“The Political Ambiguities of Neoclassical Economics.”  Research in the History of Economic Thought and Methodology, ed. Biddle and Emmett, v. 31a (Bingley, U.K.: Emerald, 2013), 217–224. 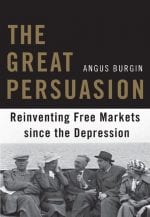 The Great Persuasion: Reinventing Free Markets since the Depression

Keynote presentation on “Hayek, Friedman, and the Return of Laissez-Faire” at the Hoover Institution, June 2014.

Discussion of The Great Persuasion with Harvard University Press.

Discussion of The Great Persuasion on EconTalk.

Discussion of The Great Persuasion with Chris Gondek of the “Invisible Hand” podcast, available on iTunes.

Discussion of The Great Persuasion with John Miller of National Review, available at the “Between the Covers” podcast website or on iTunes.

“Hayek Lecture” at Duke University, on the Mont Pelerin Society and the postwar transformation of ideas about free markets: available at YouTube.

Keynote address on The Great Persuasion at Muhlenberg College.

Presentation at a panel from the 2010 Organization of American Historians on The New Intellectual History of Conservatism.