Tobie Meyer-Fong, professor of history, is a cultural historian of early modern and modern China.  She began teaching at Johns Hopkins in 2000.  She received her bachelor's degree from Yale University in 1989 and her doctoral degree from Stanford University in 1998.  She served as editor of the journal Late Imperial China from March 2007-December 2018.  She has been a visiting scholar at Nanjing University, East China Normal University,  the Institute of Modern History at Academia Sinica, the Institute for Advanced Studies on Asia (Tokyo), and the Institute of Literature at the Chinese Academy of Social Sciences.  Her books and several of her articles have been published in Chinese translation.

Professor Meyer-Fong is an advocate of intensive language training and promoter of regional and area expertise.  She remains active as part of the second cohort of the Public Intellectuals Program organized by the National Committee on US-China Relations.  She has written for the Los Angeles Review of Books, China File, China Channel, Pengpai (the Paper), and The Hill.  She has appeared on the Kojo Nnamdi Show (WAMU) and been interviewed by (among others) the BBC World Service, Dongfang zaobao, Caixin Global, and the Washington Post food section.  She recently gave a public lecture on Qing palace women in popular culture at the National Museum of Asian Art (Freer and Sackler Galleries).

Professor Meyer-Fong has recently given academic and public talks focusing on the figure of Li Gui, a survivor of the Taiping civil war who circumnavigated the globe in 1876. She also has developed projects on the state of the field of Qing studies and has offered commentary based on her research on images of the Qing dynasty (and the Chinese past more generally) in contemporary China.  Her recent research efforts have focused on the history of the Zhoushan Archipelago, further exploration of the theme “early modern China in the Late Imperial World,” and a family history of childhood and outward migration from Zhoushan to the United States during the Cold War.

Professor Meyer-Fong maintains an eclectic portfolio of undergraduate courses.  These include a broad survey of China’s early history (Neolithic to Song), an introduction to the Chinese Cultural Revolution in history and memory, and a comparative survey focused on the making of National Identity in 20th-Century China and Japan. A freshman seminar, Monuments and Memory in Asian History, uses famous sites to introduce first year students to historical methods and regional dynamics. Her upper-level seminars include Women and Modern Chinese History and Late Imperial China: History and Fantasy.  She has advised senior theses for both East Asian Studies and History on topics including public dancing in contemporary China, the role of Johns Hopkins Medicine in the formation of Peking Union Medical College, representations of military women in 20th century China, and the image-making activities of the empress dowager Cixi in comparative perspective.

Professor Meyer-Fong admits graduate students in Chinese history with Professor William T. Rowe and in Japanese history with Professor H. Yumi Kim.  She also has worked closely with PhD students in East Asian sociology, politics, and literature, and those in the history department who are interested in comparative empires, material culture, print culture, or gender.  Her graduate seminars include Reading Qing Documents, and topics courses such as Cultural Histories of Late Imperial and Modern China.

Professor Meyer-Fong is the author of two monographs and a widely cited state-of-the field article on printing and book culture in late imperial China.  She also has published articles on various topics including commemoration, travel and tourism, poetry anthologies, civil war, and gardens.  Links to a selection of her articles appear below. 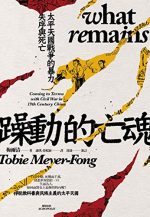 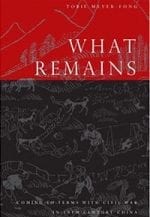 What Remains: Coming to Terms with Civil War in 19th Century China 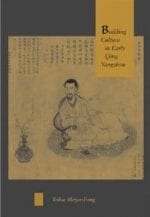 Interviewed for BBC Documentary, “The World According to Search”

“Fantasy and the Forbidden City: China’s most popular costume drama tells more about the present than it does about the Qing dynasty,” The China Channel, 2/04/2020

“America must invest in knowledge infrastructure to address global challenges,” The Hill, 1/29/2020,