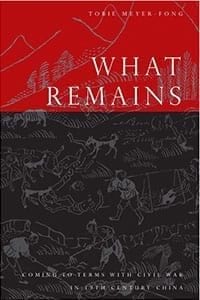 The Taiping Rebellion was one of the costliest civil wars in human history. Many millions of people lost their lives. Yet while the Rebellion has been intensely studied by scholars in China and elsewhere, we still know little of how individuals coped with these cataclysmic events.

Drawing upon a rich array of primary sources, What Remains explores the issues that preoccupied Chinese and Western survivors. Individuals, families, and communities grappled with fundamental questions of loyalty and loss as they struggled to rebuild shattered cities, bury the dead, and make sense of the horrors that they had witnessed.

Driven by compelling accounts of raw emotion and deep injury, What Remains opens a window to a world described by survivors themselves. This book transforms our understanding of China’s 19th century and recontextualizes suffering and loss in China during the 20th century.