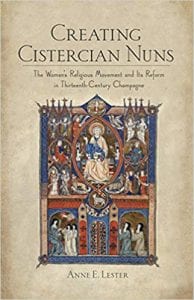 In Creating Cistercian Nuns, Anne E. Lester addresses a central issue in the history of the medieval church: the role of women in the rise of the religious reform movement of the thirteenth century. Focusing on the county of Champagne in France, Lester reconstructs the history of the women’s religious movement and its institutionalization within the Cistercian order.

The common picture of the early Cistercian order is that it was unreceptive to religious women. Male Cistercian leaders often avoided institutional oversight of communities of nuns, preferring instead to cultivate informal relationships of spiritual advice and guidance with religious women. As a result, scholars believed that women who wished to live a life of service and poverty were more likely to join one of the other reforming orders rather than the Cistercians. As Lester shows, however, this picture is deeply flawed. Between 1220 and 1240 the Cistercian order incorporated small independent communities of religious women in unprecedented numbers. Moreover, the order not only accommodated women but also responded to their interpretations of apostolic piety, even as it defined and determined what constituted Cistercian nuns in terms of dress, privileges, and liturgical practice. Lester reconstructs the lived experiences of these women, integrating their ideals and practices into the broader religious and social developments of the thirteenth century―including the crusade movement, penitential piety, the care of lepers, and the reform agenda of the Fourth Lateran Council. The book closes by addressing the reasons for the subsequent decline of Cistercian convents in the fourteenth century. Based on extensive analysis of unpublished archives, Creating Cistercian Nuns will force scholars to revise their understanding of the women’s religious movement as it unfolded during the thirteenth century.