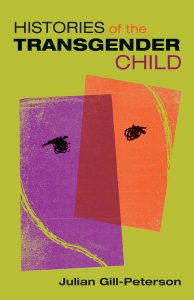 With transgender rights front and center in American politics, media, and culture, the pervasive myth still exists that today’s transgender children are a brand new generation—pioneers in a field of new obstacles and hurdles. Histories of the Transgender Child shatters this myth, uncovering a previously unknown twentieth-century history when transgender children not only existed but preexisted the term transgender and its predecessors, playing a central role in the medicalization of trans people, and all sex and gender.

Beginning with the early 1900s when children with “ambiguous” sex first sought medical attention, to the 1930s when transgender people began to seek out doctors involved in altering children’s sex, to the invention of the category gender, and finally the 1960s and ’70s when, as the field institutionalized, transgender children began to take hormones, change their names, and even access gender confirmation, Julian Gill-Peterson reconstructs the medicalization and racialization of children’s bodies. Throughout, they foreground the racial history of medicine that excludes black and trans of color children through the concept of gender’s plasticity, placing race at the center of their analysis and at the center of transgender studies.

Until now, little has been known about early transgender history and life and its relevance to children. Using a wealth of archival research from hospitals and clinics, including incredible personal letters from children to doctors, as well as scientific and medical literature, this book reaches back to the first half of the twentieth century—a time when the category transgender was not available but surely existed, in the lives of children and parents.