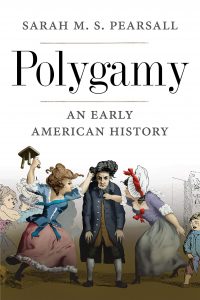 Today we tend to think of polygamy as an unnatural marital arrangement characteristic of fringe sects or uncivilized peoples. Historian Sarah Pearsall shows us that polygamy’s surprising history encompasses numerous colonies, indigenous communities, and segments of the American nation. Polygamy—as well as the fight against it—illuminates many touchstones of American history: the Pueblo Revolt and other uprisings against the Spanish; Catholic missions in New France; New England settlements and King Philip’s War; the entrenchment of African slavery in the Chesapeake; the Atlantic Enlightenment; the American Revolution; missions and settlement in the West; and the rise of Mormonism.

Pearsall expertly opens up broader questions about monogamy’s emergence as the only marital option, tracing the impact of colonial events on property, theology, feminism, imperialism, and the regulation of sexuality. She shows that heterosexual monogamy was never the only model of marriage in North America.