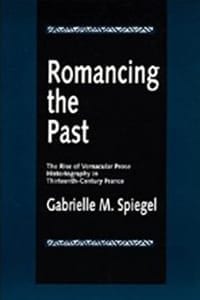 In a poststructuralist study of 13th-century French historical texts, Gabrielle Spiegel investigates the reasons for the rise of French vernacular prose historiography at this particular time. She argues that the vernacular prose histories that have until now been regarded as royalist were actually products of the aristocracy, reflecting its anxiety as it faced social and economic change and political threats from the monarchy.