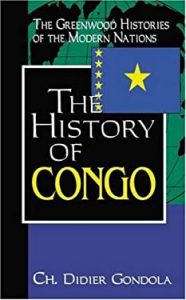 This book begins with a survey of Congo’s early history, when diverse peoples such as the Luba, the Kuba, and the Nilotic inhabited the area, and continues by tracing the country’s history through the Belgian period of colonization and the dictatorships of Mobutu and Kabila. Biographical portraits present important figures in Congo’s storied history. An annotated bibliography and chronology help make this the most current and accessible introduction to this fascinating, complex, and long-suffering nation.

The Democratic Republic of Congo, formerly Zaire, is located at the center of Africa. The country encompasses the entire Congo River Basin, the potential source of 13% of the world’s hydroelectric power. The Congo River Basin also contains one-third of Africa’s rainforests, countless species of trees, and more then 10,000 species of flowering plants. Congo contains extremely valuable deposits of diamonds and coltan, a metal used in high-tech machinery. Because of this abundance of natural resources, Congo has unfortunately been the site of colonial domination, repressive dictatorships, and internecine violence between rebel groups and neighboring countries.