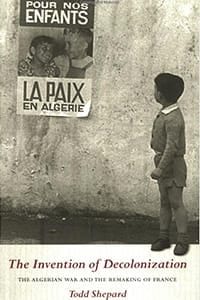 In this account of the Algerian War’s effect on French political structures and notions of national identity, Todd Shepard asserts that the separation of Algeria from France was truly a revolutionary event with lasting consequences for French social and political life. For more than a century, Algeria had been legally and administratively part of France; after the bloody war that concluded in 1962, it was other—its 8 million Algerian residents deprived of French citizenship while hundreds of thousands of French pieds noirs were forced to return to a country that was never home. This rupture violated the universalism that had been the essence of French republican theory since the late eighteenth century. Shepard contends that because the amputation of Algeria from the French body politic was accomplished illegally and without explanation, its repercussions are responsible for many of the racial and religious tensions that confront France today. In portraying decolonization as an essential step in the inexorable “tide of history,” the French state absolved itself of responsibility for the revolutionary change it was effecting. It thereby turned its back not only on the French of Algeria—Muslims in particular—but also on its own republican principles and the 1958 Constitution. From that point onward, debates over assimilation, identity, and citizenship—once focused on the Algerian “province/colony”—have troubled France itself. In addition to grappling with questions of race, citizenship, national identity, state institutions, and political debate, Shepard also addresses debates in Jewish history, gender history, and queer theory.